To the average layperson, that title wouldn’t seem particularly important, but the average layperson would be wrong. Joseph von Fraunhofer is the reason that we know what the sun is made of. His invention has given humanity the tools to figure out what the sun is made of. We can use it to measure the age of light, or to determine the composition of the matter it passes through.

Today we can build spectrometers that can measure the blood sugar level of a diabetic patient, without sticking him with a needle. With a spectrometer, you can take a solution, any solution, and use a little light and Fraunhofer genius to determine exactly what chemicals are in it. 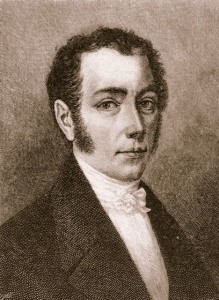 Fraunhofer’s life is fascinating. In 1798, at the young age of 11, he was orphaned and apprenticed to a glass maker. It became evident that the man wasn’t particularly interested in building code violations, because the entire workshop collapsed in 1801. While this might seem a bit of a drag for Joseph–who was inside at the time,–the disaster caught the attention of the prince-elector, who would later become King Maximilian I Joseph, of Bavaria. He personally headed up the rescue operation and met the young lad.

Because the man apparently knew talent just by looking at it, the prince saw to it that young Fraunhofer was given books, money, and free time to study. His investment was well placed. Fraunhofer became the best glass maker in the world.

Thanks to Fraunhofer’s contributions, Bavaria overtook England as the leader in optics research. He invented the spectroscope in 1814. In fact, his discoveries earned him a knighthood in 1824, two years before his death. Like all glass makers of the time, he died early because of heavy metal poisoning. 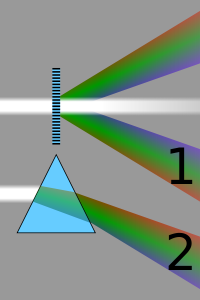 The way the spectrometer works is by capturing light and dispersing it. Electromagnetic waves, of which visible light is only a small part, come in different wavelengths, each of which interacts a little bit differently with matter. Each wavelength is perceived as a slightly different color by the eye.

Some objects, like water, refract light. Refraction is just a redirection of light as it enters a new medium. That’s why it looks like your straw bends as you stick it into your drink. Dispersion happens if your medium affects the slightly longer wavelengths differently than shorter one. One bends at a sharper angle than the other, which separates out the light according to wavelength like so. ——>

While he was not the first to discover them, the importance of his technology, in exploiting them for knowledge and scientific advancement, earned him the honor of lending his name to them. The Fraunhofer lines look like this:

Those little black lines are among the most important discoveries in optics. They are absorption lines, and Fraunhofer mapped 570 of them. Each element on the periodic table absorbs and scatters a different set of wavelengths. It filters them out of the sun’s complete spectrum, leaving us with a bar code etched into the immaculate solar spectrum, that tells us the chemical composition of the substance the light passed through, in this case, the Sun itself and Earth’s atmosphere.

Therefore, Fraunhofer’s discoveries allowed us to determine what the sun is made of. The same principle is used to measure things like blood glucose levels, and the contents of unknown chemical solutions.

Thanks to Joseph von Fraunhofer and Hubble’s Law, we can also use the known absorption spectrum of the stars to measure the amount of redshift that the light has undergone, telling us the age and distance travelled prior to reaching us.

Daniel Harris is a freelance writer who enjoys learning and writing about science. Having written for the industry in the past, Dan has had the opportunity to learn about the photophysics niche, which has continued to fascinate him. One of the great challenges facing the scientific community is interacting with the public in a way that doesn’t bore regular people to death. Dan sees it as part of his responsibility to help bridge that gap. If you’re interested in science writing, check out my article on the subject.