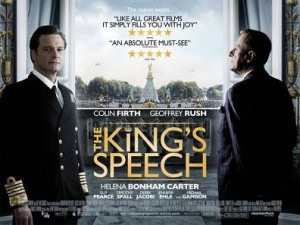 I will start by saying that The King’s Speech is an exceptional movie. I took the opportunity to see this movie in theaters when it first came out, in 2010. There is a reason that this movie, starring Colin Firth and Geoffrey Rush, received four Oscar awards (and was nominated for another eight) [1]; unfortunately, that reason was not because of the historical accuracy of the film.

It is no secret that many of the details in this movie have been skewed and exaggerated. Hugo Vickers, a royal adviser to film, stated that he understands that the adjustments were necessary to make an entertaining movie. He also believed that correct details are important, however, for this particular movie the “essence of the story” is what was most important.

So while the movie wasn’t completely honest, it got out its message. As I look into the historical accuracy–or lack of historical accuracy–in this film, I run across article after article crying foul. Slate’s review of the film is entitled Churchill Didn’t Say That – The King’s Speech is riddled with gross falsifications of history. The Washington Post reviews the movie as “Brilliant filmmaking, less-than-brilliant history.” My favorite article title is from New Republic; the headline of their article was simple–Royal Mess. However, the article with the hardest-hitting, historical-correcting blows comes from The Daily Beast. Their article, The King Who Couldn’t Speak, is a well-written piece by British historian Dr. Andrew Roberts. Dr. Roberts claims that the film “gets the story all wrong and is simply bad history.”

“…viewers should know of the very many glaring and egregious inaccuracies and tired old myths that this otherwise charming film unquestioningly regurgitates.” [3]

Some of the more egregious historical inaccuracies from his lists are:

While the list of smaller inaccuracies are too many to list, The King’s Speech, overall is excellent! As far as my moviegoing experience, The King’s Speech was so impressive that I can overlook the “egregious inaccuracies and tired old myths.” I highly recommend that you take the opportunity to watch this film. If you want a more detailed account of historical discrepancies, I suggest checking out the full article that I mentioned above from The Daily Beast.

[1] IMDb: Awards for The King’s Speech

[2] The Guardian: How historically accurate is The King’s Speech?

[3] The Daily Beast: The King Who Couldn’t Speak

5 thoughts on “Is The King’s Speech Historically Accurate?”