When Henry Ford saw fit to install a bumper on the Ford Model A, in 1927, I bet he never thought he would be the innovator to aid in giving a voice to the nation. When Ford implemented the bumper, it was meant as a protective measure for the car. Never in his wildest dreams could he foresee that the bumper would become a personalized billboard voicing one’s opinions, political affiliations, and religious beliefs.

Let’s not get ahead of ourselves though. The first bumper stickers were actually not stickers at all. In the late 1930’s when the concept of bumper advertising popped into Gill’s head, it was a large flag-like material attached to the bumper by wires. Like any invention, there would be stages and vast improvements along the way. These flag-like bumper stickers would evolve into paper, into paper on cardboard, and finally vinyl with an adhesive back. Once establishing the ‘perfect’ bumper sticker, he contacted the Nationwide Advertising Specialty Company, in Arlington, Texas, to receive a marketing plan to launch the idea of bumper stickers. [2] And did it work; every company wanted a bumper sticker!

Without much argument I think you will agree that today—the majority of—bumper stickers are for political support. This all started with the 1952 presidential race between Eisenhower and Stephenson. [3] While there are bumper stickers for all causes, businesses, and beliefs, the majority of what I personally see are either presidential election candidates or pro-life vs. pro-choice. (This, however, could just be a reflection of my city.) And of course the “My Child is an honor student at ________.” Seeing this sparked my curiosity. I decided to try to find some of the inventors of certain bumper stickers and I ran across an interesting one. With little effort I stumbled over an article and found the genius mind behind, “My kid beat up your honor student.” It was Paul Rosa, a comedian, who created this idea during a stand-up routine, in the early 1990’s.

“It said, ‘I’m proud of my honor student.’ It was harmless enough, but a little annoying, people bragging about their kids to strangers on the highway. I decided to design my own bumper sticker that said, ‘My kid beat up your honor student.'” [4]

And that he did; this would mark the birth of this comical bumper sticker. In this story, I noticed at the end Rosa mentioned a decline in the bumper sticker business. “There is less rebellion than there was 35 or 40 years ago. There are fewer causes for rage — gay rights and civil rights and women’s rights have all advanced. There’s no draft.”

Could it be that fights for rights are over? Certainly not…People are still expressing themselves and fighting for rights. It is called the internet. The internet has replaced the need for bumper stickers. An internet meme mocking Chik-fil-a is certain to circulate one-million times faster than a bumper sticker. 35-40 years ago, there was no way to voice your cause as easily as there is today. Today you can start a blog, make Youtube videos, social network with Facebook and Twitter, and use these technologies to quickly mass and protest.

It goes without say that before internet the bumper sticker was everyone’s voice. It was the never wavering, an always present form of one’s first amendment right. Like the title says, it is “24/7, unless you park in a garage.” And since I park on the street, I hope that everyone, even my neighbors, will know where to go for their history fix.

My wife and I joke about getting this bumper sticker. (She jokes…I, for one, love bags of cash.) 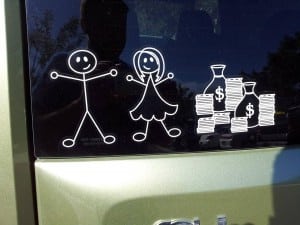