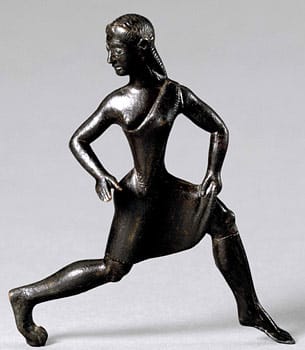 The Spartans are known for producing fierce and strong warriors in battle. You may think it’s all there was to their civilization, as seen in movies like 300. But have you thought about how the Spartan women lived?

Here are five facts about Spartan women that give you a glimpse on how a Spartan woman lived during those ancient times.

1. Spartan girls were given formal education in order to train them to be productive members of society. This was also to prepare them to become wives and mothers of Spartan soldiers.

Formal education for Spartan girls usually took place in the home. However, there were also  public schools that catered to girls. It was assumed that Spartan females could read and write, and also learned arts, like dancing and poetry. An emphasis was given on physical education. Spartan girls could equally compete with the boys when it comes to athletics. A healthy body for Spartan girls was important, as this prepared them for their later role of child-bearing.

2. Athletics was heavily emphasized for Spartan females. They could compete with the males in sports like wrestling, gymnastics, and racing (both by foot and on horse). Spartan females participated in sporting events alongside males, in full view of the public.

An event called Gymnopaedia was frequently held for Spartan youths, to showcase their athletic prowess as well as their unclothed and toned bodies. Aside from Gymnopaedia, Spartan women also joined the Olympics and important wrestling competitions.

3. Spartan mothers served as the head of the household while the fathers and sons were away at war. At age 7, sons were taken away from their mothers and placed in agoge, a military training and educational system that all Spartan males must undergo through. Meanwhile, the girls stayed with their mothers until they got married (in their late teens or early twenties). During their time at home, females occupied themselves with managing the helots, who performed domestic tasks like cleaning and weaving, and maintained their physical strength and prepared for childbirth.

4. Spartan women could also have their own property. According to the site Women in the Ancient World, Spartan women owned more than a third of the lands. They could freely discard the land if they want to, and daughters were also passed on inheritance along with their brothers.  In short, Spartan women have their say on economic matters.

5. Spartan women married at a later age, at around 18 years old and above. This was for the purpose of procreation, to ensure that the Spartan female was physically and mentally fit for sexual intercourse. Most marriages were “bride-captures”, which was pre-arranged with the consent of the bride’s father. This ceremony began with the bride being dressed in men’s sandals and a cloak, with her hair cut short. The groom, usually aged 30, would carry off his bride to bed. He would then return to the barracks after the act was consummated. 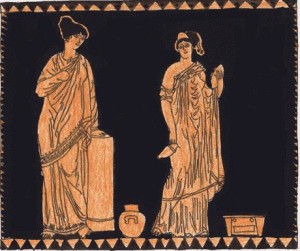 In a nutshell, Spartan women enjoyed rights that other Greek city-states didn’t bestowed onto their female citizens. They were at par with the males when it came to equality. They wielded social and economic power, and most of all, were allowed to take part in affairs like voicing out their opinions and even participate in sporting events.

The Spartan civilization was a step ahead in regards to their treatment of women in the ancient world.

About the author: Eliza Sullin is a college student and likes to read about world history. She did her best essay on History once about the treatment of women in Sparta and Athens.