Cowboy boots have been making fashion statements around the world for decades. Today, everyone from the most watched A-lister in Hollywood to the ‘regular Joe’ on the street is sporting this iconic footwear in a very wide variety of materials, styles and colors. Over the years, we’ve come to take cowboy boots for granted so it’s only fitting to take a look back to see how this iconic American footwear has evolved throughout history.

American cowboys were men who made their living herding cattle on ranches in the ‘Wild West’. These cattle ranch workers have been wearing special footwear since the late 1800s called cowboy boots. In the early days, these boots were made exclusively of cowhide leather. The boots were designed to protect the foot and legs while riding on horseback and while working in rough conditions. A typical pair of cowboy boots worn by herders featured a high top or shaft to protect the lower legs and pointed toes to help guide the boot into the stirrup of the saddle. The high heel of the boots kept the feet in the stirrups while riding and were also designed for the fitting of detachable spurs.

The Industrial Revolution is the period in time spanning from the mid 1700s to mid 1800s. During this era, a major turning point in manufacturing took place, ushering in the mass production of cowboy boots. Fashion magazines started featuring cowboy boots on their pages with features like decorative top-stitching and cutouts of geometric patterns. From the mid 1800s to 1890s, cowboys were routinely driving cattle From Texas to Kansas. This was when people other than ranchers, herders and farm workers began wearing leather cowboy boots with long shafts to protect themselves both when riding horses and against brush, thorns and poisonous snakes while walking. 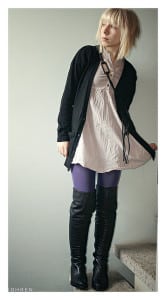 Modern-day cowboy boots are being made from a wide range of materials including cowhide, snakeskin, ostrich, alligator, buffalo and eel. It’s amazing to think that the cowboy boot has evolved through the centuries as a common boot made for riding horses to footwear which has taken center stage as coveted wardrobe additions!

Stephenie Meyer writes about beauty and fashion. She likes Langstons Boot Shop where she can shop for fashion, art & fine craftsmanship.