*An update to this article. As of today, December 18th, 2016, the Haunted Pillar of Augusta has been destroy. A piece of history was destroyed when a Ford Taurus plowed through it early this morning. For more on the story, here is the official news story.

An Attempt to Debunk The Haunted Pillar of Augusta, Georgia

It really irks me when I find a topic that interests me and I cannot find conclusive evidence to write a proper article. A friend and former resident of Augusta, Georgia, told me about the cursed pillar that resides in downtown Augusta. Knowing that all aspects of history interests me, he told me of The Haunted Pillar and how those that attempt to move it or destroy it are severely injured or die. Additionally, the pillar was part of a market where slaves were sold. There are rumors as to why the market is cursed–both how the pillar came to be and why is still stands. However, now that I am finished researching my article, I find that I’ve got 200 pieces to a 100 piece puzzle. This is what I know.

The Haunted Pillar of Augusta

The pillar that stands at the corner of Fifth and Broad is affectionately referred to as “The Haunted Pillar of Augusta.” [1][2] However, there are those that call it “The Whipping Post” [3] and “The Cursed Whipping Post.” [4] It was originally part of the Lower Market, built in 1830 [2] or 1837 [1] (My guess is 1830). The site marker does not say when it was built, just that it replaced the one that was destroyed in 1829. 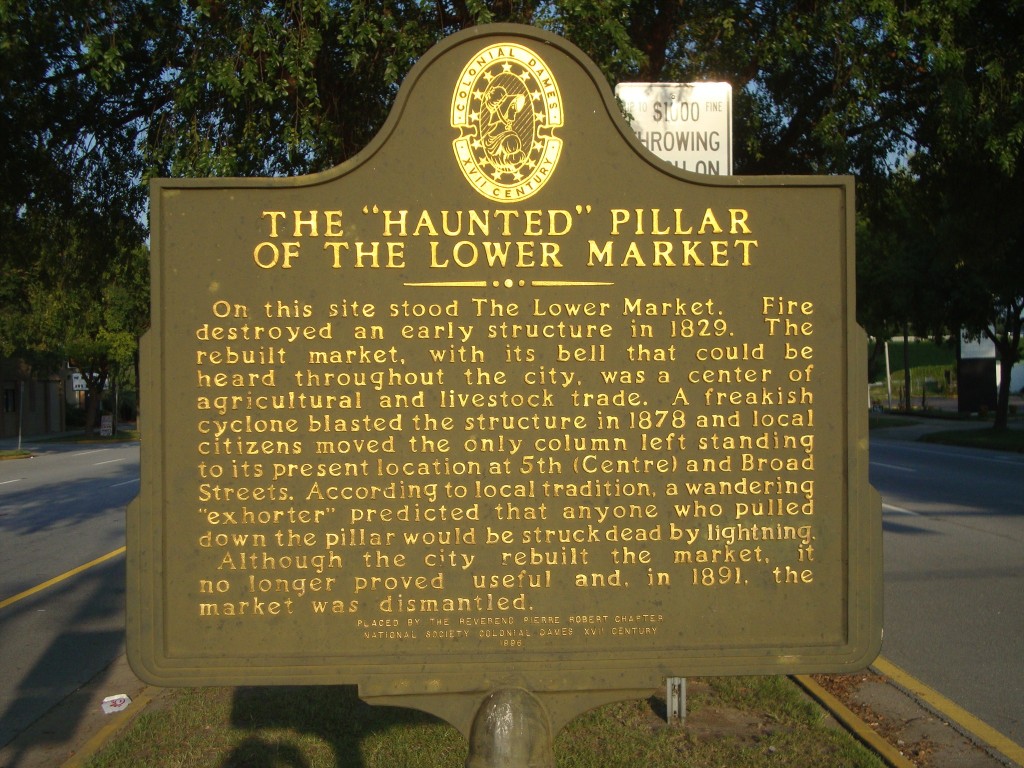 The history behind the pillar seems to be as uncertain as its year of inception. There are those that believe that the pillar was part of a market “where slaves were likely bought and sold.” [3] Not only was it a column in a market where slaves were sold, but said column was used as a whipping post. “It was used in the Old South to punish slaves that misbehaved and such.” [4] I am not really sure as to what “and such” constitutes, but how dare those slaves misbehave…

While two of my sources agree that the pillar is directly linked to slavery, another thinks that slaves might have been sold in the Lower Market, however, not nearly as many as locals like to report: “Now, there’s been a lot of talk here in Augusta, about slaves being sold there…the truth is, very few slaves were sold there. If a slaver owner were to die, they might auction his slaves there, but that didn’t happen often.” [1]  That being said, I have one source that says, “there is no evidence that any slaves were ever sold at the market.”

Another discrepancy is how the pillar came to be cursed. There are two main theories: the first involves a preacher, and the second a Voodoo Priestess. What I find most concerning about this is that there are multiple quotes floating around. How can there be multiple quotes from a person that may or may not have existed?

It is believed that a preacher was attempting to talk to the people in the Lower Market, when he was shooed away. Reportedly, the preacher stated, “If this business finds itself torn apart and destroyed, you remember how you wouldn’t let a preacher talk to the people here.” [1] Another source quotes the priest as saying, “A great wind will destroy this place except for one pillar…and whomever tries to remove this remaining pillar will be struck dead.” [2]

Possibly the most plausible explanation for the cursed upon the pillar is that of voodoo. It is believed that column has survived all these decades due to a “Voodoo Priestess.” [3] My favorite narrative is the one of the slave that was chained to the column and used voodoo to curse it, letting it “remain there forever as a reminder of the wrong done to his people.” [4]

In 1878, a cyclone tore through the town of Augusta destroying the Lower Market, leaving one lone pillar still standing.

The Curse of the Haunted Pillar of Augusta

In further questioning my friend, Jack Tardy, former resident of Augusta, Georgia, this is the tale as he best recalls:

“[The Haunted Pillar] is the last standing remnants of an old slave market from Pre-Civil War times. Anyone, in fact, everyone who tried to knock it over was met with a cataclysmic event that either killed them or stopped them from knocking over the pillar.”

Here are some of the stories that I uncovered of the Haunted Pillar of Augusta.

“One was a man who went to get his bulldozer [to] knock it down. While he was loading the bulldozer on his trailer, he got too close to the edge. The bulldozer came off the trailer, rolling over and crushing the man. He died instantly.” [1]

“In another case, a gentleman in a pickup truck picked up a chain from his house and was coming downtown to pull the pillar over. He was involved in a fatal car accident.” [1]

[In 1879] a local grocer bought the pillar for $50 and moved it to the corner of 5th and Broad. The two men moving the pillar were stuck by lightning.” [3]

While there are many more stories, what  I find most interesting is the discrepancies in the curse.

There are some that say that just attempting to move it or destroy it is not the only way to get the curse–“even touch it and you die.” [4]

While Teresa Cheadle believes that “It is documented that each time the move was attempted an ‘accident’ occurred and someone died,” there has been plenty of times that it has been disturbed–even destroyed–and lives were spared.

One article I found stated that the column “is neither ‘real’ nor is it in the original spot.” Furthermore, “It was destroyed in 1935 in an automobile incident. The column was rebuilt…and a year later moved to the corner of 5th and Broad.” [2]

In another account, on a Friday the 13th, in 1958, “a cotton bale fell off a passing truck and knocked the pillar over.” None driving the truck or those involved in re-erecting the pillar were harmed.

While the story of The Haunted Pillar makes for a good urban legend, there does not seem to be much tangible truth to its curse or complex history.

[1] My GA History: The Haunted Pillar

21 thoughts on “An Attempt to Debunk The Haunted Pillar of Augusta, Georgia”