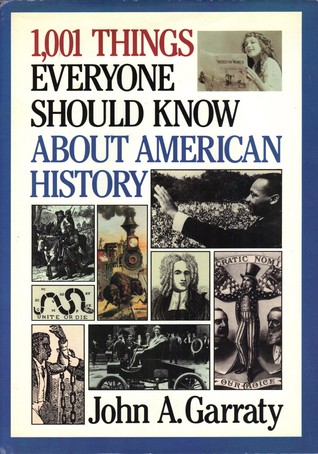 Several months ago I purchased a book entitled 1,001 Things Everyone Should Know About American History

. Now, I understand that this book is not a novel idea; it’s not genius. However, I do feel that if John Garraty, former president of the Society of American Historians and a man who the New York Times referred to as a “Historian and Trailblazing Biographer,” believes that I need to know all these facts, I better know them.

As I go through this text, I will be sharing facts that 1) I was not aware of, and 2) those facts unbeknownst to me, that I believe are interesting.

There is a section of the book that covers peculiar nicknames. I was surprised, and intrigued, to find out who the nickname His Accidency was for. On April 4, 1841, President William Henry Harrison passed away. As this was the first time that the acting President of the United States had died, everyone was uncertain as to what would happen next. That is, everyone was uncertain except for John Tyler. The Constitution states that

“In Case of the Removal of the President from Office, or of his Death, Resignation, or Inability to discharge the Powers and Duties of the said Office, the same shall devolve on the Vice President.”

It clearly states that the Vice President should take the “powers and duties” of the office; however, it doesn’t state that the vice president automatically becomes the new president. Members of Congress were not all supportive of John Tyler’s acquisition of the presidency. In fact, it would not be until 1967 that Congress would finalize, by the addition of the Twenty-fifth Amendment, the line of succession to the Executive Branch.

Those that believed that John Tyler should not become the president called him “His Accidency.” For it was not due to a vote that he became the President of the United States, just happenstance. He was so committed in his belief that he was supposed to be the President that when he received letters addressed to “Vice President” or “Acting President,” he would return them to the sender–unopened!

While President Tyler’s legacy is nothing to brag about, he did set precedent for who would become the new president in situations where the current president could no longer serve. This precedent would lead to seven other vice president stepping in as the new President of the United States, which led to the passing of the Twenty-fifth Amendment.